To support our customers from start to finish in their digital transformation.

Learn more
Strategy Ideation and strategic planning to build your organization’s digital future.
Design More than just a pretty interface: a proven process that meets your clients’ needs.
Development Digital and technological tools that truly respond to your business needs.
Performance Digital campaigns and content that increase traffic and conversion rates.
fr Contact us
_ Insights _A board of directors and the analogy of the pendulum
09/02/2022

A board of directors and the analogy of the pendulum

For some time now, I’ve been very intrigued by the roles and inner workings of boards of directors. In theory, I understand the basics: a group of people with ample management experience who exercise governance powers to defend the interests of all those with a financial investment in the organization. But what I understood less was how these members could absorb so much information in just 4 to 8 meetings per year… and still be able to meaningfully contribute to making healthy, pragmatic decisions that go over and above their previous career experience.

In the last few years, the board of directors for many SMEs and large organizations have been in the spotlight: “hall of fame,” “hunting trophies,” and “boys’ club” are just some of the names these sporadic meetings are referred to in order to rubberstamp decisions made by the executive committee without asking too many questions.

Although I don’t fully agree with this take, we must nonetheless admit that, since the 2000s, many massive blunders (Enron, WorldCom, Tyco International, Adelphia, Fannie Mae, HealthSouth, the NYSE) have raised some very legitimate questions about the relevance, role, composition, and ethics of boards of directors.

It was important for me to come up with a model that would help us to better understand the role of a board of directors so they could connect with what was really happening in an organization in 2022—and be realistic about the time members have to invest.

Exploring includes all the actions that propel an organization to reinvent itself and innovate. By definition, exploring is an expense and a risk. We’re talking here about acquisition (M&A), market penetration, R&D, integrating new business models, and technological innovation.

On the other end, exploitation includes all the actions that lead an organization to optimize the processes and business models currently in place. By definition, exploitation is pretty predictable and stable, and limits risk.

To put this into accounting terms, managers who are skilled at exploring are driven to increase the top line—revenue—while their colleagues who excel at exploitation focus on the bottom line—profits. This is a company’s EBIT.

If we take this to the extreme, an organization that only explores will never be able to generate profits via their activities, because they will never hone their processes enough to be profitable. An organization that only exploits will watch its business model peter out while their competitors continue to explore and the market evolves around them.

The analogy of the pendulum

In theory, an organization must find a balance between exploration and exploitation to be both profitable and sustainable. In practice, the perfect balance doesn’t exist, and a constant movement between both is needed.

The fundamental role of a board of directors is to ensure that this movement remains fluid and balanced, and—most importantly—is done at the right time.

An idea came to mind as I looked at this classic pyramid hierarchy. 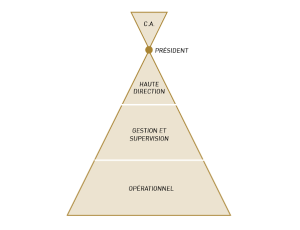 To illustrate this concept, I turned it into a pendulum. 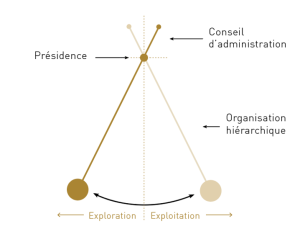 In this model, the pivot point is at the level of the CEO, the organization is the critical mass, but the mass at the top part enables the creation of a counterweight.

Unfortunately, in an organization’s lifetime, it’s often left up to the board to change the pivot point—and the CEO to push the pendulum in the other direction!

I find this analogy shines a spotlight on what’s happening: The pendulum will always be in movement, and it’s up to the board to ensure that movement stays fluid. An organization whose pendulum stops swinging for too long—no matter what side it’s stuck on—will end up losing profitability and sustainability.

To illustrate what a stuck pendulum does, let’s take the case of the Quebec company that recently declared bankruptcy. From the outside, this incredible company had decades in the business, 9-figure annual revenues, a vast pan-Canadian network, large Quebec investment, a brand new and highly competent management team, and reputable members of administration for over 20 years.

In their quest for growth and market consolidation, the board systematically approved more than one major transaction per year for almost 10 years. This meant a series of acquisitions (exploration), growing debt, and little attention focused on the effective integration of these acquisitions (exploitation). It got so that these new divisions had to be closed or sold off just a few years later, often at a major loss. The company declared bankruptcy, leaving many clients and suppliers hanging.

In this context, the pendulum stayed stuck on the side of exploration, and the board neglected their duty to push the company towards better exploiting what they already had.

For advice and news from our experts.

You would like to know everything about this project?
Fill out the form below to download the case study.