To support our customers from start to finish in their digital transformation.

Strategy. Innovation. Creation. Transformation. These terms are so overused they’ve pretty much lost all meaning. And when your organization is having a hard time calling a spade a spade, it’s going to have an equally hard time getting past its strategic incapacitation. In this second article on the subject, I’m going back to basics to talk about what I believe makes a great strategy: knowing what can be won, and using the right words to describe it.

Pop quiz: Which of the following are tactics, and which are strategies?

I like to start with this quiz whenever I give workshops on any subject involving strategy.

Usually the auditorium erupts with shouts of Tactic! and Strategy! Some points turn into a debate. I avoid sharing my opinion until we get through the list, but inevitably someone will quickly reply “It depends!”

What I like about this exercise is that it clearly illustrates two key challenges about strategy: how it’s defined, and how closely it resembles our idea of a tactic, albeit in a blurry kind of way. After all, if the definitions were clear and we could easily tell the two apart, this would be an easy quiz to ace and we wouldn’t be left with very much to talk about!

The answer, of course, is “It depends.”

Depends on what, exactly? Why isn’t this more clear? And why does it need to be so within my own organization?

I’ll talk more about the differences between strategy and tactics in my next article. But for now, let’s stick to the definition of strategy.

First of all, it goes without saying that there are as many definitions of strategy in business as there are experts who’ve written about the subject. That’s not even counting the dictionary definitions! In my very humble opinion, the clearest definition of strategy is a hybrid of what Michael Porter and Webster’s dictionary have to say:

“A strategy is a collection of tactics that allow an organization to attain their goals and win.”

The idea of “tactics” and “winning” are taken directly from war strategy, whereas “attaining goals” stems from an organization’s particular aspirations.

Experts agree that, usually, a private company’s goals are centred around three large key concepts: creation, optimization, and innovation—all with the end goal of growth and profits. I’ve thought long and hard on this subject, trying to come up with a fourth way to define and achieve these goals. But strategy continuously comes down to these three main concepts.

Creation. Making something new within your organization, like developing a new product, putting a new process in place, or developing a new market. Most of the time, creation does not mean innovation, since copying something that already exists is a whole lot less risky. For example, in Quebec, Nutella has dozens of competitors, many of which are locally made products. These companies did not invent anything. They took inspiration from a leader in a well-established industry—although they certainly created something new within their own organization. The same goes for a Canadian company expanding into the US market. It may be novel for the company, but that market already has dozens of competitors.

Optimisation. Improving a process or a procedure already in place at an organization to make it more efficient or increase profitability. For example, automating a factory production line, implementing HR software, or changing one’s ERP. Very often, optimization is mistaken for innovation within organizations, since it involves things that are new for the company. Keep in mind that adding a robot to a production chain to save on labour costs is in no way innovative.

Innovation. Introducing a new product, process, or business model within an industry. Innovation—real innovation—is extremely rare. In my eight years as a consultant, I can count on the fingers of one hand the true innovations I’ve seen clients come up with. Here are a few examples of actual innovation: Blue Apron innovated by bringing a subscription-based business model to a retail food market. Uber innovated by creating a new process for the taxi industry. Nintendo innovated by launching their Wii gaming system that works via movement alone.

Many managers have a hard time calling a spade a spade, which means innovation has had to mean a lot of things to a lot of people. To clarify your strategies, your best bet is to use the right wording and avoid calling everything “innovative.” If you’re not the first on the market, if you’re entering an existing market, or if you’re replacing people with robots, you’re not innovating. You are simply creating or optimizing.

In its simplest form, strategy is represented by the graph below: 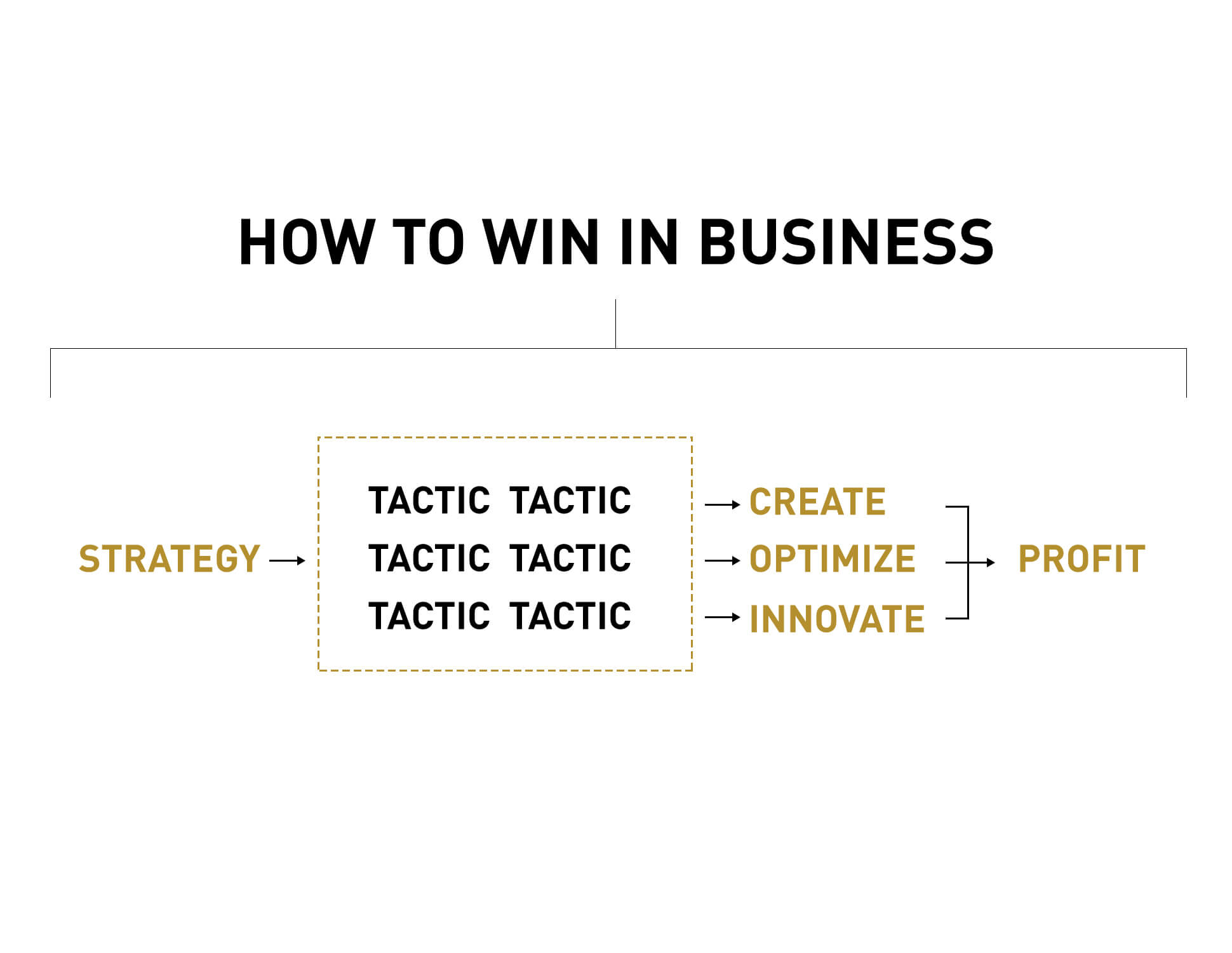 What I love most about the equation above is that it’s all encompassing while also allowing every organization the freedom to define what winning means to them.

If you lead an organization or are responsible for your company’s strategy, ask yourself the following before you even begin to scratch the surface of what strategy is: Is what you want to win clear? Have you written and documented your strategic vision? Has your goal been clearly explained to your team? If the answer to any of these is no—or, worse, “We want to win money”—I strongly suggest you begin here. Sometimes a quick 3-hour workshop centred on your company’s vision is all it takes to get started.

For advice and news from our experts.

You would like to know everything about this project?
Fill out the form below to download the case study.